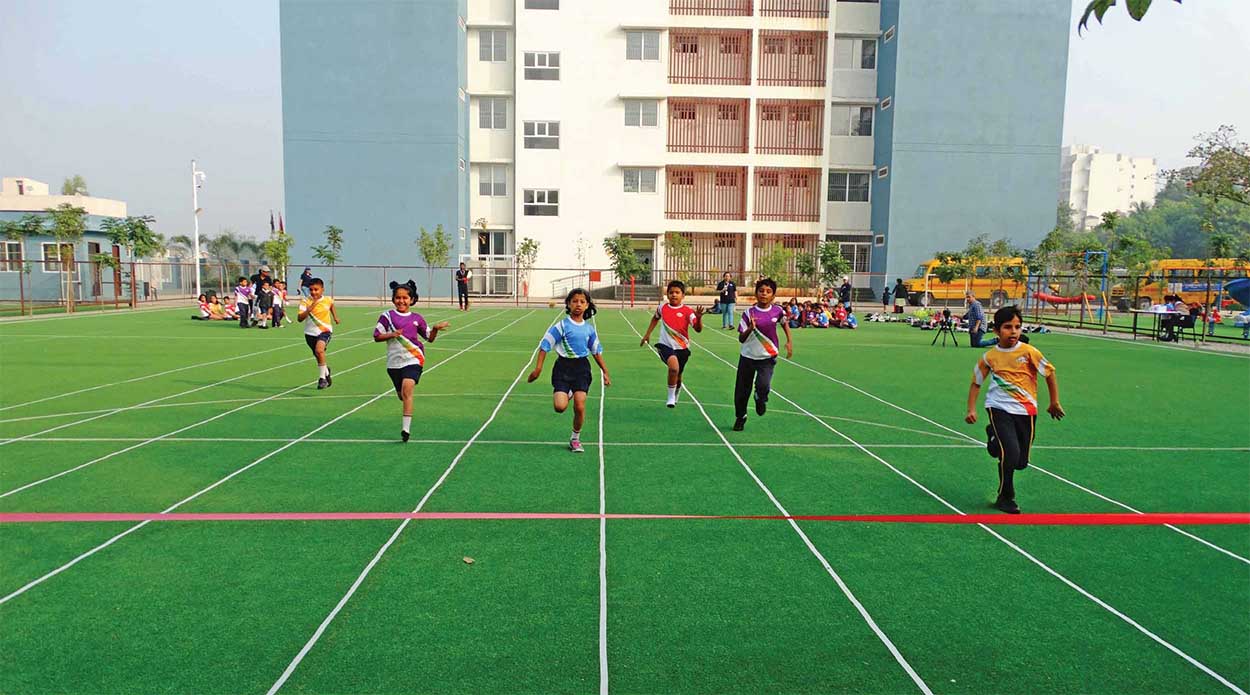 Global Indian International School (GIIS), Smart campus Hadapsar organised its first edition of Sports Day in the campus over a span of four consecutive days. Different sports activities were organized for the school students from pre-primary and primary grades with complete excitement, energy and enthusiasm.

Day 1 started with morning assembly by Grade 1 students and was followed by the sports events in the playground. The first round of athletics started with our little ones following the instructions properly and running energetically towards the finish line.

Our Primary students were so happy & excited to see the little ones and knew exactly what was expected out of them on the running tracks. The students of two classes were grouped together i.e. grades 1 & 2, 3 & 4 and 5 & 6 were combined together for the races. They performed exceptionally well in the first round. Then the pre primary & primary students ran for the final round.

The Primary students started with Hurdle races and were also grouped together like the junior lot. Each student participated delightfully and with complete determination and confidence. The ones who did not win were very optimistic to win the next competitions in the coming week. As Mike Ditka very well said "You're never a loser until you quit trying"; our students practised the same.

The second day began with a lot of hope and positivity to win among the students. As rightly said that, "Every Champion was once a contender that refused to give up", our students took motivation and prepared exceptionally well to face the challenges that were put forth during the event day.

A dodge ball match was organized in the playground of the campus; the students were divided as per their age group and according to their houses. The pitch was set and so were our students. Two circles of different sizes were marked on the ground; group A took the smaller circle & Group B the bigger one to start the match. Two matches were played simultaneously. Students were delighted to play and showcase their agility, balance, hand-eye co-ordination, flexibility & team work throughout the game.

Students were delighted to play and showcase their agility, balance, hand-eye co-ordination, flexibility & team work through the game.

Day 3 of the sports galore saw the pupils of Pre-Primary & Primary coming to the ground to participate in hopping & obstacle races and Inter house ten passes match respectively. Each participant was so cheerful and elated that didn’t bother about winning or losing the game. They were completely focussed on playing their respective games with absolute precision and focus.

The last day i.e. day 4 had Inter house relay races for the primary kids. Each house had students from all the age groups up till grade 6. Thrill and excitement to win the final game could be seen on their faces that were lit with confidence and belief in their skills. They truly represented what Michael Jordan once said, "Just play. Have Fun. Enjoy the Game."